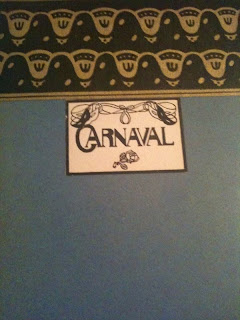 Carnaval is a ballet based on the music of Robert Schumann's, Carnaval, for piano. It was orchestrated by Aleksandr Glazunov, Nikolai Rimsky-Korsakov, Anatole Liadov, Alexander Tcherepnin. Carnaval was choreographed by Ballets Russes’ Mikhail Fokine, with the costumes designed by Léon Bakst. Fokine created Carnaval for a benefit given in St. Petersburg, Russia and it premiered on February 20, 1910.
Some of the leading dancers of the Imperial Ballet were cast in Carnaval: Tamara Karsavina (Columbine), Leonid Leontiev (Harlequin), Vera Fokina (Charina), Ludmila Schollar (Estrella), Bronislava Nijinska (Papillon), Vsevolod Meyerhold (Pierrot), Vasily Kiselev (Florestan), Aleksandr Shiryaev (Eusebius). 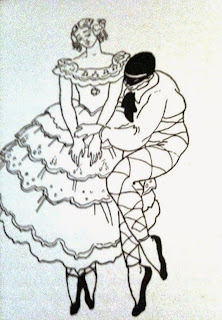 Carnaval did not become world-famous until after it was performed by Diaghilev's Ballets Russes at the Teater des Westens, in Berlin on May 20, 1910. Lydia Lopokova performed as Columbine and Vaslav Nijinsky as Harlequin.
The image above (top of page)is the cover of The Impressions of the Russian Ballet, Carnaval, written in 1918 by C.W.Beaumont, with illustrations by A.P. Allinson. The remainder of the images in this Blog are also from the booklet.
Diaghilev told a story that occurred during a performance of Carnaval. Enrico Cecchetti was miming the role of Pantalon, an elderly dandy of the Romantic period, when he mixed up the order of the program one evening and entered the stage in Carnaval dressed in his costume for the Chief Eunuch in Scheherazade!

On 14 September 1933, the ballet was revived in London by the Ballet Russe de Monte Carlo, staged by Leon Woizikowski, with Alexandra Danilova performing as Columbine.
Posted by MyBalletsRusses at 2:03 PM No comments: 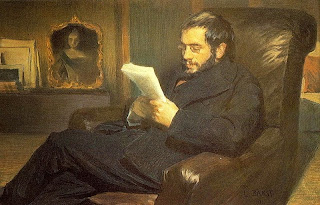 Although Benois worked primarily with Diaghilev for the Ballets Russes, he simultaneously collaborated with the Moscow Art Theatre and other notable theatres of Europe.

Alexandre's father Nicholas Benois and brother Leon Benois were noted Russian architects. Alexandre didn't plan to devote his life to art and graduated from the Faculty of Law, St. Petersburg University in 1894. Three years later, while in Versailles, he painted a series of watercolors depicting Last Promenades of Louis XIV. When exhibited by Pavel Tretyakov in 1897, they brought him to attention of Sergei Diaghilev and Leon Bakst. Together they founded the art magazine and movement Mir Iskusstva which aimed at promoting the Aesthetic Movement and Art Nouveau in Russia. 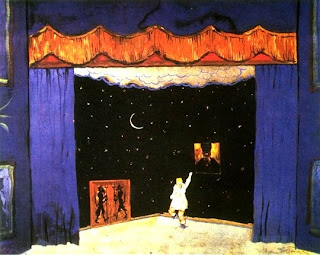 In 1901, Benois was appointed scenic director of the Mariinsky Theatre where he devoted most of his time to stage design and decor. He also designed sets and costumes for Diaghilev’s Ballets Russes productions of Les Sylphides in 1909, Giselle in 1910, and Petrouchka in 1911. Alexandre Benois was Artistic Director of Diaghilev's Ballets Russes. He resigned that position after a fight with Leon Bakst. A panel of scenery with the portrait of the Charlatan he painted for the ballet Petrouchka had been damaged during dress rehearsal and Benois was ill so he asked Bakst to repair it for him. Bakst painted over the image replacing it with his own, the two men argued, Diaghilev and others defended Bakst, and Benois quit.
Benois edited Mir Iskusstva but also pursued his scholarly interests preparing and printing several monographs on the 19th-century Russian art and Tsarskoye Selo. In 1903, he printed his illustrations to Pushkin's Bronze Horseman. From 1918 to 1926, he ran the gallery of Old Masters in the Hermitage Museum, to which he secured his brother's heirloom—Leonardo's Madonna Benois.
Posted by MyBalletsRusses at 10:06 AM No comments: