Narcissse is a classical ballet performed in one act. Narcisse premiered on April 26, 1911 at Casino, Monte Carlo. Narcisse was a replacement ballet for Daphnis et Chloe.

Diaghilev had invited Ravel to St. Petersburg, to work with Bakst and Fokine on Daphnis et Chloe. However, Ravel was late in producing the score, and Fokine could not begin the choreography, so Narcisse was done in its place.
Narcisse was originally danced by the legendary Tamara Karsavina, Bronislava Nijinska and Vaslav Nijinsky. In the black & white photo, is Bronislava Nijinska dancing in Narcisse with Fokine's wife Vera Fokina. 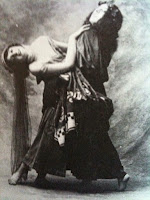 The costumes were designed by Leon Bakst, as was the decor. Fokine was the choreographer, and the music was by Nicolas Tcherepnine who also composed Le Pavillon d'Armide.
Posted by MyBalletsRusses at 12:44 PM No comments:

Mikhail was born in St. Petersburg on April 25, 1880 and studied at the Imperial School. He graduated at the age of 18, immediately entering the Maryinsky Theatre. He was promoted to soloist in 1904. He started teaching at the Imperial School and choreographed his first ballet, for a student performance, Acia and Galatea in 1905.

Mikhail Fokine is one of, if not the, best known choreographer of the 20th century. His ballets are still performed by ballet companies worldwide. In 1907, he choreographed The Dying Swan for Anna Pavlova, in Carnival of Animals which became her iconic solo. He also created Firebird for Pavlova, but after hearing Stravinsky’s music she refused to dance it, so Tamara Karsavina danced it.

The first ballet Fokine choreographed for the Maryinsky Theatre was Le Pavillon d'Armide. This ballet was included in the repertoire of the first season of Diaghlev's Ballets Russes, in Paris in 1909. He became Diaghlev's chief choreographer, while continuing to dance in Russia until 1918.

Fokine left the Ballets Russes in 1912 because Diaghilev was favoring Vaslav Nijinsky's choreography. He freelanced, finally settling in the United States in 1923. He married Vera Antonova Fokina, they had often been partners in Diaghilev's Ballets Russes. Fokine originally choreographed Chopiniana, to later be renamed Les Sylphides, for a performance outside the Maryinsky in 1907. He restaged Les Sylphides for the then Ballet Theatre's, now ABT, inaugural performance in 1940 at New York's Center Theatre.
Posted by MyBalletsRusses at 4:07 PM No comments:

Parade is a realistic ballet in one scene, based on a theme by Jean Cocteau. The music was done by Erik Satie, choreography by Massine, curtain, décor and costumes designed by Pablo Picasso. The first performance of Parade was at Theatre du Chatelet in Paris on May 18, 1917.
Cocteau says that the first draft of the Parade ballet was a brief ballet project called David, something he had sketched out in 1914. The ballet was to take place in front of the entrance booth of a traveling fair. David was never written, but Cocteau’s first contact with Erik Satie was in 1915, with his collaboration with Picasso beginning the following year.

Diaghilev met Picasso in the spring of 1916 when a mutual friend, Mme. Eugenia Errazuriz brought him to Picasso’s studio. It was then that Diaghilev commissioned Picasso to do the mise-en-scene for Parade. Both Picasso and Cocteau left for Rome in February of 1917, where Diaghilev’s Ballets Russes was dancing. There they met and worked with Massine.

Among the costumes Picasso designed was a horse, initially with a mannequin-rider. During the dress rehearsal, the rider fell off of the horse causing the audience to laugh, so it was removed for the remaining performances. The costume for the American Girl, which Picasso had not sketched, was actually bought the day before at a sporting goods store. The costume for the Female Acrobat that Massine had added at the last minute was made of hand-painted spiral designs Picasso painted directly onto Lydia Lopoukhova’s legs.

After a three year absence, Diaghilev’s Ballets Russes returned to Paris’s Theatre du Chatelet with Parade, a pioneer Cubist theatrical spectacular. Satie and Cocteau often disagreed regarding the noises that Cocteau wanted added to Satie’s scores. But, Cocteau was over ruled by Diaghilev and they were left out.

When the curtain went down on Parade, the audience was violent and contradictory. It was acclaimed by many intellectuals, but the public didn’t like it. It was well ahead of its time and was never added to the regular repertoire of the Ballets Russes.
In 1923, when Diaghilev wanted to restage the ballet, he asked Picasso to touch up the curtain which had been taken over by mildew. Picasso refused saying that it resembled the deteriorated frescoes of Pompeii and should remain that way!
Read "DIAGHILEV And the Ballets Russes" by Boris Kochno, 1970.
Posted by MyBalletsRusses at 11:20 AM No comments:

Vaslav Nijinsky was born in Kiev, Russia, while his parents, dancers Eleonora Bereda and Foma Nijinsky were on tour. He entered the Imperial School in St. Petersburg in 1898, and upon graduation in 1907 became a soloist with the Maryinsky Theatre.
He met Sergei Diaghilev, and Nijinsky went to Paris with him and danced the leading roles in Le Pavillion d'Armida and Les Sylphides with Anna Pavlova in 1909. The next year he danced the golden slave in Scheherazade.
He continued to dance with the Diaghilev's Ballets Russes after 1909, although Anna Pavlova left because Diaghilev favored his male dancers.

Although Vaslav danced with many great ballerinas he was most associated with Tamara Karsavina, with whom he danced in 1911 in one of the most famous ballets of the time, Le Spectre de la Rose.

Nijinsky’s choreography broke away from his classical training. His ballets were controversial, his Jeux made headlines in the morning press, and Le Sacre du Printemps had the audiences shouting obscenities in the theater and on the streets of Paris.

In 1913 the Ballets Russes toured South America, and because of his fear of ocean voyages Diaghilev did not accompany them. Without his mentor's supervision Nijinsky fell in love with Romola de Pulszky, a Hungarian dancer. They were married in Buenos Aires: when the company returned to Europe, Diaghilev, in a jealous rage, fired them both.

During World War I, Nijinsky, a Russian citizen, was interned in Hungary. Diaghilev succeeded in getting him out for a North American tour in 1916, during which he choreographed and danced the leading role in Till Eulenspiegel. Signs of his dementia praecox were becoming apparent to members of the company. He became afraid of other dancers and that a trap door would be left open. Nijinsky spent may years in and out of mental hospitals.
In 1947 the family moved to London, where he was cared for by his loving wife, Romola, until his death in 1950. He is buried in Paris at the Sacre Coeur Cemetery.
Posted by MyBalletsRusses at 6:45 PM No comments:

Parade was Picasso's first collaboration with the Ballets Russes and in a letter sent to a friend, Jean Cocteau the librettist said "Picasso amazes me every day, to live near him is a lesson in nobility and hard work" (Rothschild 49). Picasso's studio in Rome had a little crate that held the model of "Parade" with its trees and houses, and on a table were the painted characters: the Chinaman, Managers, American girl, and horse. Cocteau described his friend's unusual artistic process: "A badly drawn figure of Picasso is the result of endless well-drawn figures he erases, corrects, covers over, and which serves him as a foundation. In opposition to all schools he seems to end his work with a sketch." The audiences were amazed by the first ballet to have cubist costumes, sets, and choreography. After World War I, Picasso made a number of important associations and relationships with figures associated with Serge Diaghilev's Ballets Russes. Among his friends during this period were Jean Cocteau, Jean Hugo, Juan Gris and others.

In the summer of 1918, Picasso married Olga Khokhlova, a ballerina with Sergei Diaghilev’s troupe, for whom Picasso was designing a ballet, Parade, in Rome; and they spent their honeymoon in the villa near Biarritz of the glamorous Chilean art patron Eugenia Errázuriz. Khokhlova introduced Picasso to high society, formal dinner parties, and all the social niceties attendant on the life of the rich in 1920s Paris. The two had a son, Paulo, who would grow up to be a dissolute motorcycle racer and chauffeur to his father. Khokhlova’s insistence on social propriety clashed with Picasso’s bohemian tendencies and the two lived in a state of constant conflict. During the same period that Picasso collaborated with Diaghilev’s troup, he and Igor Stravinsky collaborated on Pulcinella in 1920.
Posted by MyBalletsRusses at 10:21 AM No comments: 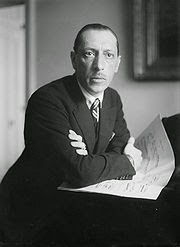 The most notable of Diaghilev's composers was Igor Stravinsky, who is now recognised as the premier composer of the early twentieth century. Diaghilev had hired the young Stravinsky at a time when he was virtually unknown to compose the music for The Firebird, after the composer Anatoly Lyadov proved unreliable. Diaghilev was thus instrumental in launching Stravinsky's career in Europe and the United States of America.

Stravinsky's early ballet scores were the subject of much discussion. The Firebird (1910) was seen as an astonishingly accomplished work for such a young artist (Debussy is said to have remarked drily: "Well, you've got to start somewhere!"). Many contemporary audiences found Petroushka (1911) to be almost unbearably dissonant and confused. "The Rite of Spring" caused a near-riot by the audience, stunned because of its willful rhythms and aggressive dynamics. The Rite of Spring had to be pulled after just a few performances. The audience's negative reaction to it is now regarded as a theatrical scandal as notorious as the failed runs of Richard Wagner's Tannhäuser at Paris in 1861 and Jean-Georges Noverre's and David Garrick's Chinese Ballet at London on the eve of the Seven Years' War. However, Stravinsky's early ballet scores are now widely considered masterpieces of the genre. Even his later ballet scores (such as Apollo), while not as startling, were still superior to most ballet music of the previous century. 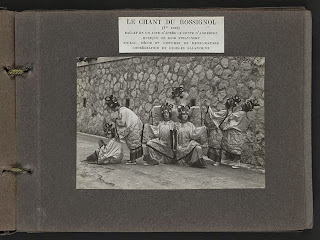 Diaghilev commissioned many other original scores, as well as borrowing freely from the existing musical canon. His ballets variously included music by Debussy, Milhaud, Poulenc, Prokofiev, Ravel, Satie, Respighi, and Richard Strauss.
Posted by MyBalletsRusses at 9:23 PM No comments: